As stated in the book “Nurture Shock”, by Po Bronson and Ashley Merryman, a 2007 study in the Journal of Marriage and Family found that out of 17,000 families with kindergartners, 75% of white parents never, or almost never, talk about race. This same study noted that nonwhite parents are about three times as likely to discuss race as white parents.

In light of current events and the #BlackLivesMatter movement, I want to recommend and eye-opening book. Nurture Shock shares some thought-provoking perspectives and definitely made me question some of my assumptions, which alone makes it a great book 😉 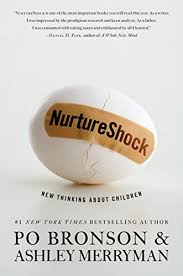 While this book discusses many other topics such as praise, siblings, lying, self-control, play, etc., I wanted to share a few of the points from Chapter 3, which is titled ‘Why White Parents Don’t Talk About Race’. Note: there is so much more in the chapter than what I am sharing here; you really have to read it to get the full context.

That being said, a few things that specifically stuck out to me as a mom…

One of the key points of the chapter was that avoiding race conversations in the attempt to create a color-blind environment is not effective. Here is an excerpt:

“Children are not passive absorbers of knowledge; rather, they are active constructors of concepts…To be effective, researchers have found, conversations about race have to be explicit, in unmistakable terms that children understand. A friend of mine repeatedly told her five-year-old son, “Remember, everybody’s equal.” She thought she was getting the message across. Finally, after seven months of this, her boy asked, “Mommy, what’s ‘equal’ mean?””

Research shows we need to be having explicit conversations with our kids about race. But I personally don’t believe it works to just talk AT them. We as parents need to listen to their thoughts. They are smart and they will get it, but they need time and space to think, discuss, and process those thoughts. Make it an open dialog, not a lecture.

I must be honest; I was surprised by this. I had always just assumed that if kids grew up in a racially diverse environment, especially if this started when they were young, it would have a positive impact on a child’s racial attitudes. Apparently not (without explicit conversations at least).

Research proves this assumption to be false.  Here are two excerpts from Nurture Shock:

“It is tempting to believe that because their generation is so diverse, today’s children grow up knowing how to get along with people of every race. But numerous studies suggest that this is more of a fantasy than a fact.”

“It’s important for parents to know that merely sending your child to a diverse school is no guarantee they’ll have better racial attitudes than children at homogenous schools.”

The basic conclusion of this point is that children like and identify with, other children that most closely resemble themselves. If we do not address the topic of race with our children, then skin color, along with other visible differences such as gender and weight, will be natural ways for children to separate individuals into groups. Once separated, children will have a natural preference for those most similar to them.

A fascinating study is referenced in Nurture Shock:

“In three preschool classrooms, kids were separated into two groups, half wore blue T-shirts, and half wore red. For three weeks, the kids wore these shirts.  The teachers never mentioned their colors, and never again grouped the kids by shirt color. The kids didn’t segregate their behavior and played with each other freely at recess.

Racial Inequality Needs to Be Discussed

It has been proven through research over and over that many parents are uncomfortable talking about race with their children. We do it often with gender, “Mommies can be doctors just like Daddies can,” but not with race. As Nurture Shock states, “it’s not complicated what to say; it’s only a matter of how often we reinforce it.”

Taking it a step further, the very best way for children to learn is to put them in the shoes of someone having to make a hard decision and then ask them to think about it and make a decision for themselves. Discuss their thoughts and reasoning, dive deep! This is exactly what we do at Acton; we ask our learners hard questions forcing them to think critically, and they do…sometimes what an 8-year-old comes up with will blow your mind. Let’s take the time to listen to their thoughts, because in my opinion, the world is missing out if we don’t expect this generation to think for themselves and move beyond where we are today!