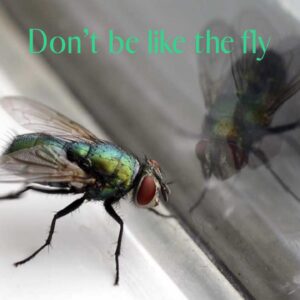 One of the best things we have in life is the ability to adapt, to change, to see other possibilities. This week I had to realize that something in our school was the fly. It has made me re-evaluate and look to other options that I think will ultimately be stronger.

It was a nice reminder for me that our journey to learn and grow never ends.  I was inspired by the story of the fly from the book You2 by Price Pritchett. It was so good that I wanted to share the story.

Story by Price Pritchett from his book You2

“There’s a small fly burning out the last of its short life’s energies in a futile attempt to fly through the glass of the windowpane. The whining wings tell the poignant story of the fly’s strategy — try harder.

But it’s not working.

The frenzied effort offers no hope for survival. Ironically, the struggle is part of the trap. It is impossible for the fly to try hard enough to succeed at breaking through the glass. Nevertheless, this little insect has staked its life on reaching its goal through raw effort and determination.

This fly is doomed. It will die there on the window sill.

Across the room, ten steps away, the door is open. Ten seconds of flying time and this small creature could reach the outside world it seeks. With only a fraction of the effort now being wasted, it could be free of this self-imposed trap. The breakthrough possibility is there. It would be so easy.

Why doesn’t the fly try another approach, something dramatically different? How did it get so locked in on the idea that this particular route, and determined effort, offer the most promise for success? What logic is there in continuing, until death, to seek a breakthrough with “more of the same”?

No doubt this approach makes sense to the fly. Regrettably, it’s an idea that will kill.

“Trying harder” isn’t necessarily the solution to achieving more. It may not offer any real promise for getting what you want out of life. Sometimes, in fact, it’s a big part of the problem.”